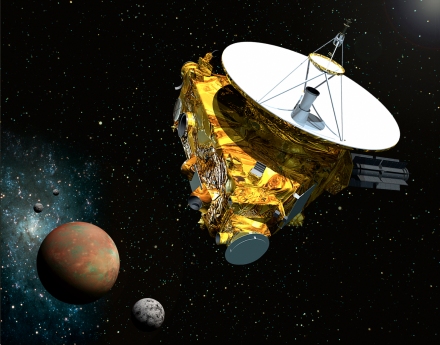 In wasted space news, a group of calling themselves the New Horizons Message Initiative is proposing to replicate the space spam of the Lone Signal Project, only much slower.

The New Horizons probe (pictured above) was launched in January 2006 to survey Pluto and the surrounding area. Seven months later, Pluto was demoted from “planet” to “big rock really far away”, eliminating any sort of prestige associated with the mission.

Their plan is to upload a crowd-sourced message from humanity to the inhabitants of Pluto and the greater Pluto area. Although the content of the message is still to be finalized, it is expected to start with an apology for naming their planet after Mickey Mouse’s dog.

An Initiative spokesman elaborated on the project’s goals. “We’re concerned that the Voyager I message is too high-brow. You know, it’s all science and classical music and ‘Hello from Earth!’ in 60 languages. Nobody wants to communicate using math and elements and stuff, but everybody loves pictures of kittens! It’s the universal language! LOL!”

One crowd, who requested anonymity because they were considering becoming a mob, claimed that they would like to highlight humanity’s warlike nature by sourcing the messages “Steelers Rule!” and “Cowboys Rule!” A spokesman explained, “We also think it would be pretty cool if aliens landed on Earth and their first words were, ‘Take us to your head coach.’ That would rule! Go Packers!”

SETI Institute co-founder Jill Tarter says that Message Initiative staff will be responsible for selecting the messages to be beamed to New Horizons. “This should serve as a new, more candid kind of cosmic note. The kind of note that allows average Plutonites to see Miley Cyrus’ MTV Video Music Awards performance for themselves, but doesn’t include spoilers for the series finale of Breaking Bad.”

Plans to include a message plaque on the probe at launch time were scuttled due to time constraints. “We had a small team on a tight budget, and I knew it would be a big distraction,” explained investigator Alan Stern. “We had to have this whole program ready to launch in only four years! Who has half an hour to run down to the trophy shop at the mall and get a plaque engraved?”

Jon Lomberg, whose included his gold record on Voyager I, said that the New Horizons transmissions “will be both a message from Earth and a message to Earth.” A self-addressed stamped envelope has been attached to the inside of New Horizons, which will allow the Plutonians to send back videos of drunk Plutonese babies, and fill in a brief survey for a chance to win an iPad.

The Initiative wants to use memory space on the probe for its messages. That space is currently being used to save Seasons 1 and 2 of Lost, which the spacecraft is still planning to watch when it gets the chance.

Polls show the public is divided on the issue of space spam. 48% of Americans believe that crowd-sourced messages will deter aliens from invading Earth by demonstrating how little we have of value. 44% believe that benevolent galactic civilizations will come to rescue us from our culture. 8% insisted on giving their opinions of Miley Cyrus’ MTV VMA performance.

At its current speed, the probe will reach Pluto in summer 2015, and reach interstellar space in about 30 years. Once New Horizons leaves the solar system, NASA has refused to confirm that it intends to upload an apology to the peaceful star-dwelling creatures of Gliese 526. The probe is expected to arrive in the Gliese system in spring of 308,593 A.D.

(Click on the picture above for the original story.)

One thought on “Bad news on the (new) horizon”