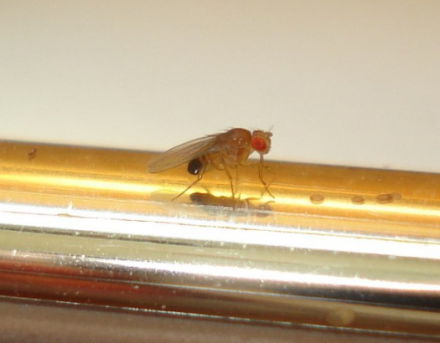 In entomological layoff news, a study in Science Magazine created 3,500 fruit flies, then dismissed 3,499 of them after discovering that none of them could walk backwards.

All but one of the flies at the company’s Genetic Switches division was laid off this week.  The flies were responsible for carrying genetic switches in different parts of the brain.  Scientists found one fly that was willing to walk backwards when the switches were activated by heat, resulting in a 42% savings in genetic switch carrying costs.  The company has refused to release the name of the fly in question, saying that he and his family are staying in a local half-eaten apple until the controversy blows over.

As it turns out, walking backward is controlled by two neurons. The first neuron appears to be the “initiator”, which sends the signal to start walking.  The second, a neuron known only as “Gene”, sends the signal to go backwards, perhaps preventing the fly from walking forward and getting laid off.

One scientist, who requested anonymity because he was very forward-thinking, expressed sympathy for the unemployed insects, but explained that scientists don’t know how to tell a fruit fly to walk backwards.  “So we just watched until one of them did it, and got rid of all the rest.  In retrospect, we probably should have mentioned ‘Must be able to walk backwards’ at some point during the interview process.”

This was the second round of dismissals for the struggling magazine, which earlier fired neurons in their Thermogenetics division after a recent heat activation.

The magazine, which uses the terms “gene” and “neuron” interchangeably, will use these neuron/genes as a starting point to find other networks involved in walking, such as Walking Tall, Walking Dead, and Walking on Sunshine.

Click on the unemployed bug to read the original story.